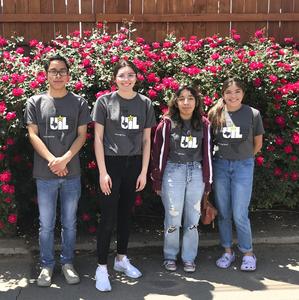 Galvan became one of four AHS students to be a State Academic Champion since 1983 and the first-ever State Champion in Accounting and Computer Applications for AHS.

Prior to the state meet, Galvan captured the district and regional championships in both categories.

This was the first full year for Recio to compete in UIL Headline Writing and her first time competing at the State Academic Meet.

Leading up to the state meet, Recio was the District 2-4A champion and the Region I runner up.

This was the first full year for Rangel to compete in UIL Headline writing and her first trip to the State Academic Meet.

Rangel became part of a select group as she is the fifth person to place in the Top 6 in a journalism state competition since 1983.

To qualify for state, Rangel was the district runner-up and placed third at Region.

Senior Edwin Munoz-Campos finished in the top 20 in Computer Science and top 15 in Number Sense at the state meet. He is the first state competitor for AHS in both events since 2013.