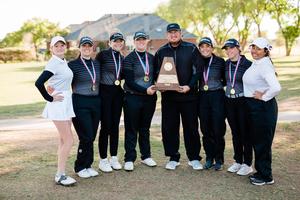 After the first round of play at Shadow Hills Golf Course in Lubbock, Texas, the Andrews Black team was in the lead by 16 strokes. By the end of round two on Tuesday, the squad of five pushed their lead to 33 strokes and clinched a spot at the state tournament.

The Andrews Gold squad finished fourth, just missing the cut to advance to state. Alexza Madrid will advance to the State tournament as the first medalist while Kyleigh McGowen will advance as the second medalist.

The UIL Girls Golf State Tournament will take place on Monday and Tuesday, May 10-11, at the Plum Creek Golf Course in Kyle, Texas.