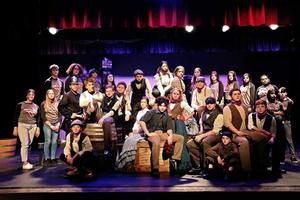 ANDREWS, Texas – The Andrews High School One Act Play cast and crew were awarded the Regional Championship on Tuesday, earning a spot at the Texas State competition. This is the first time since 2014 AHS has taken a play to the State contest.

The cast & crew also won the District and bi-district championships with their play, Scuttlers by Rona Munro. The play will make its first State UIL One Act Play appearance debut from AHS.

The group moves on to the State Championship and will compete against the Top 8 plays in 4A division on April 28-29 in Schertz, TX.

The Mustang Theatre Company were regional qualifiers in 2018 and 2019. Last year’s production was the district champion, but the season was cancelled.

The group will host a public performance on Monday, April 26 at 6:00 p.m.  in the AHS Little Theater. Tickets are $10 and include dessert.