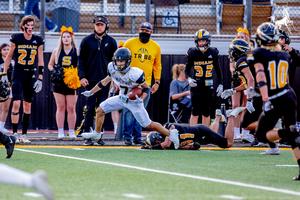 Headlining the list of Mustangs was senior Luke Armendariz. He was named Third Team All-State for wide receivers. In 11 starts this season, Armendariz recorded 71 catches for 1,509 yards and 20 touchdowns.

Teammate AJ Britten was also selected to the All-State Third Team for tight ends. The senior started in 11 games this season and scored two TDs. Britten had 39 catches and 476 yards while also posting a 93 percent blocking average. Britten is a two-time All-District tight end for District 2-4A.

Junior Andrew Vasquez and sophomore Luis Cervantes were awarded spots on the All-State Honorable Mention team. Vasquez started all 12 games on the defensive line and had 72 tackles, 13 tackles for loss and nine sacks. The junior also forced and recovered a fumble.

In his 12 starts, Cervantes tallied 134 tackles, 13 tackles and five sacks this season. The sophomore had one interception and two forced and recovered fumbles. Cervantes was awarded District Co-Defensive MVP and Permian Basin linebacker following the standout season.